The Man Who Sold The World..KURT COBAIN - Finale... 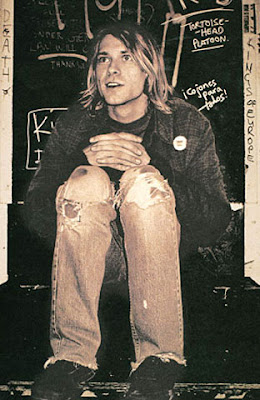 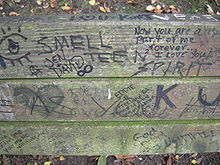 The bench in Viretta Park has become a notable memorial to Cobain. 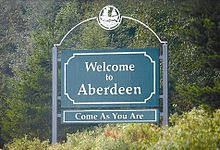 In 2005, a sign was put up in Aberdeen, Washington that reads "Welcome to Aberdeen - Come As You Are" as a tribute to Cobain.

Cobain has been remembered as one of the most iconic rock musicians in the history of alternative music. He was ranked by Rolling Stone as the 12th greatest guitarist and 45th greatest singer of all time, and by MTV as 7th in the "22 Greatest Voices in Music".In 2006, he was placed at number twenty by Hit Parader on their list of the "100 Greatest Metal Singers of All Time".

In 2005, a sign was put up in Aberdeen, Washington that read "Welcome to Aberdeen — Come As You Are" as a tribute to Cobain. The sign was paid for and created by the Kurt Cobain Memorial Committee, a non-profit organization created in May 2004 to honour Cobain. The Committee planned to create a Kurt Cobain Memorial Park and a youth center in Aberdeen. Because Cobain was cremated, his remains scattered into the Wishkah River in Washington), many Nirvana fans visit Viretta Park, near Cobain's former Lake Washington home, to pay tribute. On the anniversary of his death, fans gather in the park to celebrate his life and memory.

In 2006, Cobain took the place of Elvis Presley as the top-earning deceased celebrity, after the sale of the Nirvana song catalogue. Presley reclaimed the spot in 2007.

Controversy erupted in July 2009 when a monument to Cobain in Aberdeen along the Wishkah River included the quote "...Drugs are bad for you. They will fuck you up." The city ultimately decided to sandblast the monument to replace the expletive with "f---",but fans immediately drew the letters back in.The monument and bridge have become popular places for fans to leave tributes.

Gus Van Sant loosely based his 2005 movie Last Days on the events in the final days of Cobain's life. In January 2007, Courtney Love began to shop the biography Heavier Than Heaven to various movie studios in Hollywood to turn the book into an A-list feature film about Cobain and Nirvana. The video game Guitar Hero 5 features Cobain as a playable character. However, the inclusion of Cobain incensed surviving bandmates Krist Novoselic and Dave Grohl and wife Courtney Love, expressing their dismay at the ability to use Cobain with any song.

Books and films on Cobain

Prior to Cobain's death, writer Michael Azerrad published Come as You Are: The Story of Nirvana, a book chronicling Nirvana's career from its beginning, as well as the personal histories of the band members. The book explored Cobain's drug addiction, as well as the countless controversies surrounding the band. After Cobain's death, Azerrad re-published the book to include a final chapter discussing the last year of Cobain's life. The book is notable, as it involved the band members themselves, who provided interviews and personal information to Azerrad specifically for the book. In 2006, Azerrad's taped conversations with Cobain were transformed into a documentary about Cobain, titled Kurt Cobain About a Son. Though this film does not feature any music by Nirvana, it has songs by the artists that inspired Cobain.

In the 1998 documentary Kurt & Courtney, filmmaker Nick Broomfield investigated Tom Grant's claim that Cobain was actually murdered. He took a film crew to visit a number of people associated with Cobain and Love; Love's father, Cobain's aunt, and one of the couple's former nannies. Broomfield also spoke to Mentors bandleader Eldon "El Duce" Hoke, who claimed Love offered him $50,000 to kill Cobain. Although Hoke claimed he knew who killed Cobain, he failed to mention a name, and offered no evidence to support his assertion. Broomfield inadvertently captured Hoke's last interview, as he died days later, reportedly hit by a train. However, Broomfield felt he hadn't uncovered enough evidence to conclude the existence of a conspiracy. In a 1998 interview, Broomfield summed it up by saying,

"I think that he committed suicide. I don't think there's a smoking gun. And I think there's only one way you can explain a lot of things around his death. Not that he was murdered, but that there was just a lack of caring for him. I just think that Courtney had moved on, and he was expendable."

Journalists Ian Halperin and Max Wallace took a similar path and attempted to investigate the conspiracy for themselves. Their initial work, the 1999 book Who Killed Kurt Cobain? argued that, while there wasn't enough evidence to prove a conspiracy, there was more than enough to demand that the case be reopened.A notable element of the book included their discussions with Grant, who had taped nearly every conversation that he had undertaken while he was in Love's employ. Over the next several years, Halperin and Wallace collaborated with Grant to write a second book, 2004's Love and Death: The Murder of Kurt Cobain.

In 2001, writer Charles R. Cross published a biography of Cobain titled Heavier Than Heaven. For the book, Cross conducted over 400 interviews, and was given access by Courtney Love to Cobain's journals, lyrics, and diaries.Cross' biography was met with criticism, including allegations of Cross accepting secondhand (and incorrect) information as fact.Friend Everett True, who derided the book as being inaccurate, omissive, and highly biased; he said Heavier than Heaven was "the Courtney-sanctioned version of history" or, alternatively, Cross's “Oh, I think I need to find the new Bruce Springsteen now” Kurt Cobain book. However, beyond the criticism, the book contained many details about Cobain and Nirvana's career that would otherwise been unnoted. Additionally, in 2008 Cross published Cobain Unseen: Mosaic of an Artist, a compilation of annotated photographs and creations and writings by Cobain throughout his life and career. In 2002, a sampling of Cobain's writings was published as Journals. The book fills 280 pages with a simple black cover; the pages are arranged somewhat chronologically (although Cobain generally did not date them). The journal pages are reproduced in color, and there is a section added at the back with explanations and transcripts of some of the less legible pages. The writings begin in the late 1980s and were continued until his death. A paperback version of the book, released in 2003, included a handful of writings that were not offered in the initial release. In the journals, Cobain talked about the ups and downs of life on the road, made lists of what music he was enjoying, and often scribbled down lyric ideas for future reference. Upon its release, reviewers and fans were conflicted about the collection. Many were elated to be able to learn more about Cobain and read his inner thoughts in his own words, but were disturbed by what was viewed as an invasion of his privacy.

In 2003, Omnibus Press released Godspeed: The Kurt Cobain Graphic. It was written by Jim McCarthy and Barnaby Legg with illustrations by Flameboy. It depicts Cobain's life, but is not a factual biography. Rather, it uses artistic license to tell Cobain's story from his own point of view.

In 2009, ECW Press released a book titled Grunge is Dead: The Oral History of Seattle Rock Music. It was written by Greg Prato, featuring portions about Nirvana and Kurt Cobain's life and death (including new interviews with bandmates and friends), as well as exploring the history of grunge in great detail. A picture of Cobain from the Bleach era is used for the book's front cover, and its title comes from a shirt that Cobain was once photographed wearing................

The Current Time Is??